Tom Loxley, an Anglo-Indian academic living in Melbourne, loses his dog in the bush, and then, eight days later, finds his dog, but not before de Kretser has taken us into Tom’s inter-continental history, and his mothers’ current failing health and difficult relationship with her sister; his growing obsession with Nelly Zhang, an artist with a secret past; and his developing relationships with Nelly’s circle of bohemian friends.

Entwined with the narrative are many and varied indications of the uncanny – we know that Tom has written a study entitled Meddlesome Ghosts: Henry James and the Uncanny, for example – but in the novel, the uncanniness is bound up more with an inability to recognise what’s really going on in any given situation, or to appreciate who someone really is.  It plays on the idea that there’s something beyond that which we commonly experience, but we can’t quite make out what it is.

For example, Tom is accepted by Nelly’s friends, but without a full understanding of their shared experience, and

“not everything he failed to grasp was insignificant.  Any by accumulation, even minor errors take on a density and cast shadows.  Reality is an effect produced by the accrual of detail, a trickery whose operations Tom had traced in the pages of countless fictions.  He was unable to shake off the impression that a similar process governed his relations with Nelly, staging elaborate scenarios that mimicked the solidity of truth.  These, if probed, readily revealed their flimsiness; yet who could be sure that the vista thus arrived at was not equally contrived?  The bottom of the box might always be false; so Tom feared.”

And Tom is right to be frightened – the bottom of his box does indeed turn out to be false.

One of Freud’s indicators of the uncanny is the confusion about whether an apparently live figure is actually inanimate, or vice versa.  De Kretser makes a play on this uncertainty by giving Nelly inhuman attributes.  She has cheekbones “as broad as a cat’s” and “small, creaturely hands”.  She “has a way of pausing between sentences that rendered her talk mechanical … (Tom) found himself tensing for the grind of levers”.  And later, her mode of expression is characterised as “talk as faulty machinery”.  These markers add to Tom’s confusion about who and what Nelly might be.  When he looks at her, he has a “brief, disconcerting sense of a family face overloaded with strangeness”. 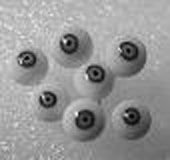 De Kretser also introduces a hint of the uncanniness associated with dolls and disconnected body parts.  In the converted factory building where Nelly lives, there used to be a manufacturer of children’s shoes, and the tiny moulds – “little wooden feet” – are displayed in the apartment.  Nelly’s great-grandfather used to be apprenticed to a manufacturer of dolls, and she has inherited a collection of dolls’ eyes.  “Tom looked at them, and they looked back.  It was impossible not to avert his gaze”.   How disturbing it is to be stared at by inanimate eyes.

Tom’s search for the dog takes him into the woods several times, and de Kretser invokes the eeriness of having the “disconcerting impression of being both trapped and exposed”.  Tom feels that “something was not right.  It came to him that someone he wouldn’t want to see would be waiting beyond the trees”.  He calls the dog, then listens for a response.  But “if he was silent and still for too long, he had the impression that something was listening to him”.

Finally, one of the most disturbing images comes when de Krester, ostensibly discussing the place of Australia in the modern world, invokes the idea of the haunted house: “it was like living in a house acquired for its clean angles and gleaming appliances; and discovering a bricked up door at which, faint but insistent, the sound of knocking could be heard”.

Has that sent a shiver down your spine?