A couple of years ago, in late December at around half past seven in the morning, I was walking along the old village road, now a cycle path, on my way to work.  The street lamps were still on, but it was just beginning to get light.  It was cold, but not icy or damp – the air was still, and it was very quiet.

Suddenly, behind me, I heard the sound of tyres fast approaching.  I turned to make sure I wasn’t in the cyclist’s way – but there was no-one there.  What I was hearing I couldn’t see.  I couldn’t place the sound – a strange and unnerving uncanny moment.

Recently I was reading Robert Macfarlane’s excellent book Landmarks, and came across the term hummadruz – “a noise in the air that you can’t identify, or a sound in the landscape whose source is unlocatable”.  Just what I had experienced.  I love to come across a word like this, which collects and defines an otherwise hazy collection of perceptions. 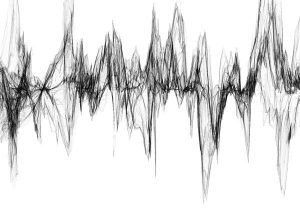 There’s a sound engineer and composer who uses the term as the title for his blog.  Pete writes on a variety of subjects relating to music and its technologies, and about strange sounds and their origins.  Number Stations belong to this category.  They are weird, shortwave radio broadcasts where a brief (usually) musical introduction is followed by a series of number groups, read in an electronically distorted voice.   I’d never heard of these before, but they are really creepy to listen to.  I can understand why they’ve been the subject of conspiracy theories; the (unconfirmed) preferred explanation is that they are generated by various intelligence agencies to pass coded information to their spies.

One such, called Swedish Rhapsody, is here. Bear with the beeps – the broadcast proper starts after a few seconds.

Here’s what Pete says:  “The tinkly music box tune and the samples voice of a young girl are surely the stuff of radio nightmares.   One of the the most fascinating things about these Numbers Stations is that on a purely aural level they are evocative and intriguing” – and, I would add, uncanny.

A Radio 4 Documentary discusses the broadcasts in detail.  And have a look here – the 5 Creepiest Number Station Sounds Ever Recorded.  This is Pete’s blog.