The Old Ways is a fascinating account of some of the paths that Robert Macfarlane has taken during his exploration of ancient byways and strange landscapes, and some of the people he has encountered on his travels.

One such is the artist Steve Dilworth.  He lives with his wife in the challenging environment of the Outer Hebrides – on Harris, where, Macfarlane tells us, they can “live cheaply in a landscape of animal rituals, megaliths, weather dramas and excellent malt whiskies”.  Macfarlane refers to the artist’s studio as the “lair of a demented magus”, containing as it does the materials he finds around the island – skeletons of birds, their feathers, bones of whales, porpoises, and sheep, minerals and rocks, fossilised wood, water, eggs, air and sand.  Out of these diverse elements, Dilworth fashions what he describes as “ritual objects for a tribe that doesn’t exist”.

Macfarlane, in the short film Steve Dilworth – A Portrait, directed by Paul Cox, says the artist is creating objects that “when you encounter them you either feel incredibly attracted by them or incredibly repelled by them because they feel oddly, uncannily familiar to you anyway, as though he has reached down into your subconscious and dredged out these strange shapes and forms”. 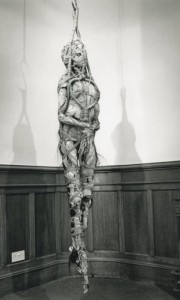 Even stranger is Dilworth’s work The Hanging Figure, dating from 1979.  He bought a skeleton, originally collected by a 1920’s Amazon expedition, from a dealer in anatomical supplies.  The bones arrived in a box, and, in what Macfarlane calls “a resurrectionist act”, Dilworth reassembled them, using sea grass plaited into ornate braids to bind them together.  He filled the skeleton with calf organs, and clothed it in calf skin.  It becomes a “sacrificial victim, (a) voodoo fetish”, says Macfarlane; and very weird it is too.  (It is now in the Richard Harris Art Collection in Chicago.)

I’ve never thought of a dentist’s chair as an uncanny object, but the Dilworths possess just such a one.  It’s a Victorian specimen, and the way Macfarlane describes it lends a strange duality – threatening but also welcoming, familiar but strange.  It’s “set on a pole on a massive base.  It was upholstered in pink corduroy, with a narrow chintzy trim.  There was a cast iron grille for the patient’s feet to rest on, with the word AUSTRAL woven into it in iron, surrounded by a floral leaf design.  the dark-stained pine of the chair arms was worn blonde by decades of anxious fingers.  Levers and pedals offered a variety of operating positions.  It was very sinister and very comfortable”.

Ritual objects, The Hanging Figure, the dentist’s chair – there’s an ambiguity hovering over them; they’re examples of uncanny objects which we can’t quite get to grips with.  The tribes don’t exist, and neither do their rituals, so how can they needs ritual objects?  The creature that is The Hanging Figure was human, but now it’s a hybrid of bone, grass and calf, fashioned into a new being – what has it become?  And the construction of the chair suggests an instrument of torture, but it’s upholstered in comforting pink corduroy.

Here’s a whole new class of uncanny creations to provide food for thought!

One thought on “TRIBES THAT DON’T EXIST”